Spicy Italian Pickled Okra or: How I Stopped Worrying and Learned to Love Preserving

When I was nine my family moved from Chicago to a farmhouse in Elizabethtown, PA for one year. I remember this time as some of the most fun I had growing up.  Being city raised, everything was novel to me at first and I ran around pretending to be a hardened New Yorker proclaiming everything I saw "quaint".

Once the novelty wore off, however, I realized I had a genuine love for this kind of living.  There were deer and groundhogs and all kinds of wildlife for me to imagine I was Snow White with. A possum routinely walked to the school bus with me with her baby clinging to her underside.

I was introduced to a new vocabulary filled with verbs like hoeing, planting, and my favorite: canning.  The concept of having fruit trees in your backyard and picking raspberries to take into the house to MAKE jam boggled my mind. Jam was something that came in jars bought from the store. It seemed as odd to me to make it yourself as to build your own car to drive around in.  I didn't come around to the idea until I had a taste of the first batch: bright and more "fruity" than "sugary"... and I had made this myself.  It was a high I would seek out for the rest of my life.

As an young adult back in Chicago, I didn't do too much canning. I think it somehow just didn't seem cool. "Wait, you spent half the day stuffing food into jars that you could've just bought at the store?!", I imagined my friends saying as they rummaged thru my fridge.  They would suddenly look at me in a new light: a hermit with no social life making her own tepanade while singing show tunes to her cat.  While that wasn't too far from the truth, I didn't want the telltale jars lurking around my kitchen to prove it.

Fast forward a few years with the economy sliding down the drain and those fancy jars in Dean & Deluca's suddenly aren't looking like the end all for chic food choices.  Yes, they look beautiful and taste delicious.  But they cost as much as a week's groceries and could easily be made at home for a fraction.  The cuisine community has picked up on this and resurrected the trend of canning for the haute food lifestyle.  Elevated by fantastic articles like the New York Times' Preserving Time in a Bottle, the jarred recipe is now a fashionable keepsake of the crafting trend. 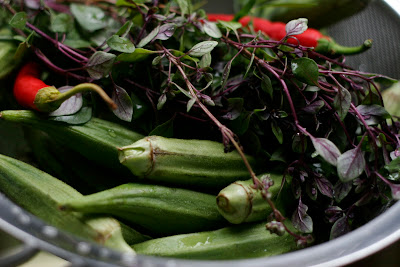 Finally absolved of any "uncool" vibes and armed with fresh herbs from my little city planting boxes, I got to work.  I had purchased some pickled okra a while back that I had really enjoyed, so this was the obvious choice for my first vinegary victims.  The process came back to me slowly, but as I plunged the jars into the boiling hot water to sterilize them, I remembered being nine again and thinking of how silly this all was, how pointless and then... how utterly miraculous. 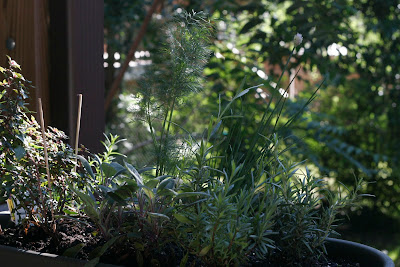 The recipe is adapted from Alton Brown's.  He's a good country boy himself so I especially love any recipe of his that includes a nod to his heritage.  I also don't trust my own acid/salinity ratio judgment, so it's good to have the foremost scientific cook help out!  I've used some purple basil that had grown like weeds for me (a miracle), as well as some red onions and yes, some red wine.  This gave the okra a beautiful ruby brine that contrasts nicely with the bright green pods. The resulting product has a great crunch and a burst of flavor that manages to be zesty (fun word) and earthy at the same time.

I hope you'll try some pickling soon.  Afterall, it's what all the cool kids are doing... 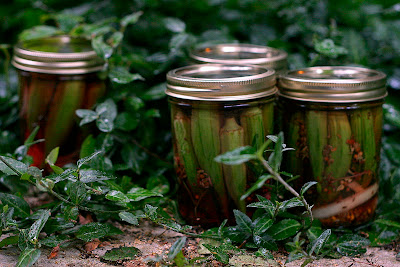 2 lbs fresh okra (try to get small, young ones, the older ones get "woody")
4 red chilies (such as Cayanne), split
8 cloves of garlic
4 sprigs of purple basil or 12 leaves of sweet/Italian basil
1/2 a red onion, cut into slivers
1 teaspoon whole peppercorns