Four of the best (and whimsical) hors d'oeuvres for a new year... 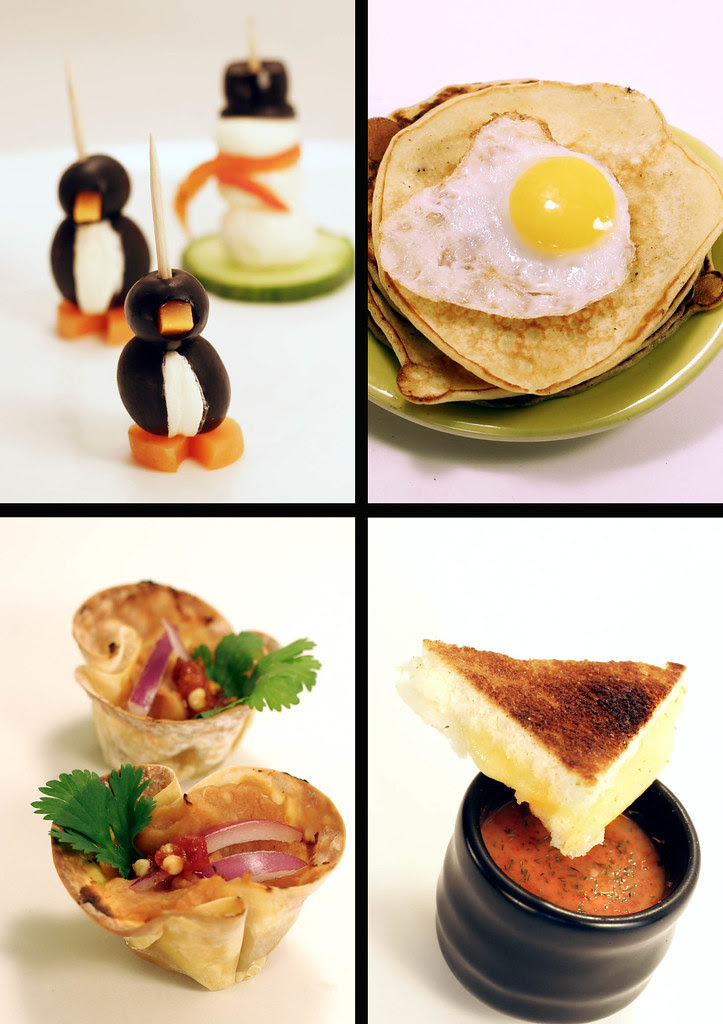 So I've been thinking about this blog a lot... though you probably wouldn't realize it since I haven't really been posting as much as I should (bad, bad Mae!).  I promise I haven't forgotten about you all, quite the contrary - with a fresh year/decade coming up, I've been busy thinking about how to make a *New and Improved!* version of the site.  I'm happy to say I think I've come up with some nifty-ish ideas (I think, kinda, maybe), and you'll just have to stick around to see what I mean by that (muahaha!).

Until then, I thought maybe I'd end this year on a classy note... and what's classier than olive penguins and cheese snowmen, I ask you?  Here's my evidence to back this up:

As for the other hors d'oeuvres on this menu, I'd say they're pretty and elegant, too.  But the most important part of all of these for me is the whimsical part.  If there's something more whimsical than miniature versions of food, I've yet to find it.  I worried these might cross the line from "whimsy" into "precious", which is the difference between, say...

... I'm not even going to go into why this little fella on the right appears to be drinking a beer larger than his torso - as if hauling those freak-huge parsnips he's got wouldn't be hard enough sober for a six-year-old.

In any case, as Jason gave these the thumbs up on my hors d'oeuvres (boys generally being the best alarmists for anything too "cutesy"), I think I'm in the clear by most standards as far as the "precious" quotient goes.  Rock on.

For the next four weeks I'll be featuring one recipe a week for these whimsical hors d'oeuvres in honor of the first month of the new decade!  Why not all at once?  Well, I have to have something to persuade you to come back and visit me over and over again, don't I?  And if you're thinking "That's lame, I'm have a NYE party tomorrow that I could use recipes for!"  Yes, this might be true, so I'll give you the gist (spoiler alerts?) for the other 3 hors d'oeuvres so you can make them if you're dying to do so tomorrow... plus you could always email me at the "Contact" tab for it.  I love getting emails.  Really, I do.

So, here is 1 of the 4 recipes for classy/whimsical-but-not-precious (and did I mention vegetarian, inexpensive and easy?) hors d'oeuvres...

Recipe numero uno: The Winter Penguins and Snowmen (make delicious armies to command at will!) 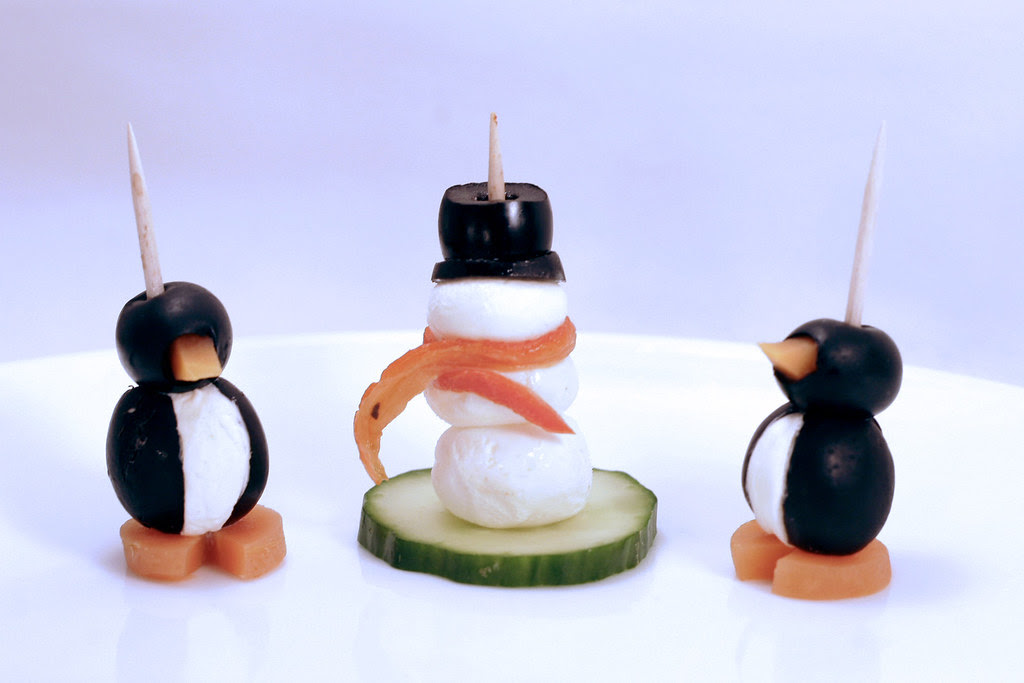 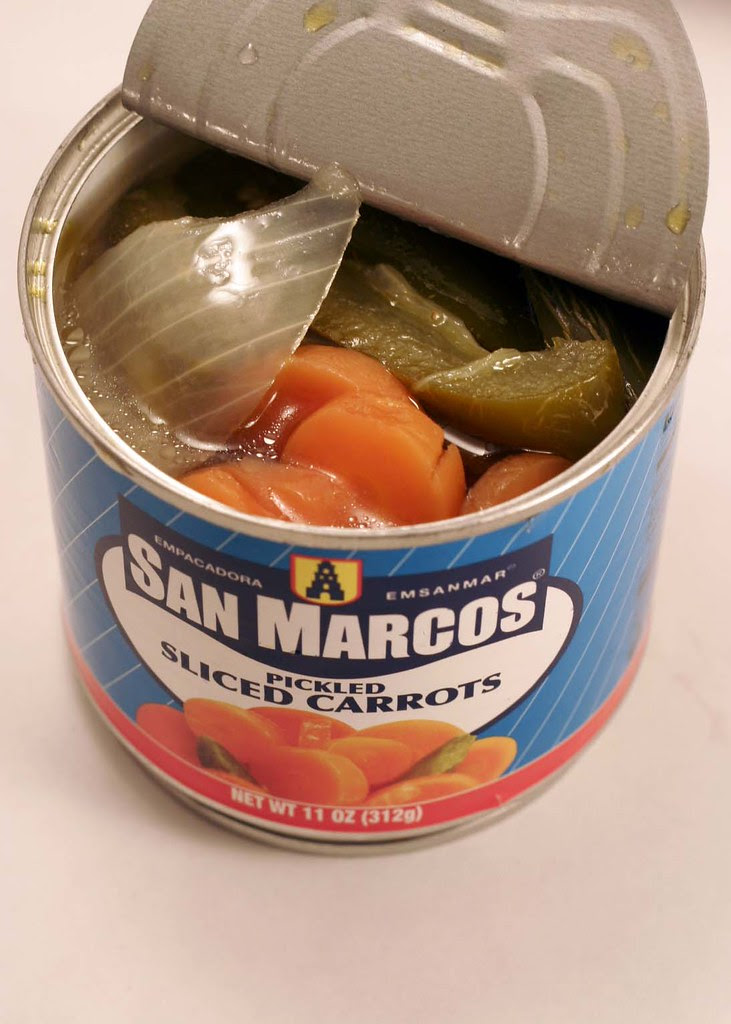 The penguin recipe can be found all over the web - I haven't been able to figure out where it's orginated from.  If you're the mastermind of this recipe (and can prove it) and reading this getting pissed that I'm reproducing it... well, I'm guessing you're pretty busy being pissed at a lot of people cause this thing is as popular as the snickerdoodle.  Feel free to send me a note, though, and I'll happily credit you for this awesome invention.  I HAVE changed it up from the versions I've found, I'd like to note, in that I used canned pickled spicy carrots instead of chopping up fresh ones.  Why?

a) They're uniform and pre-cut for my ease and comfort (yay!)
b) They're spicy, and I like spicy - I think they make these *pop* a little more then plain raw carrots - especially since California black olives and cream cheese aren't very "pop-y" on their own, though delish.

For the Penguins you'll need... 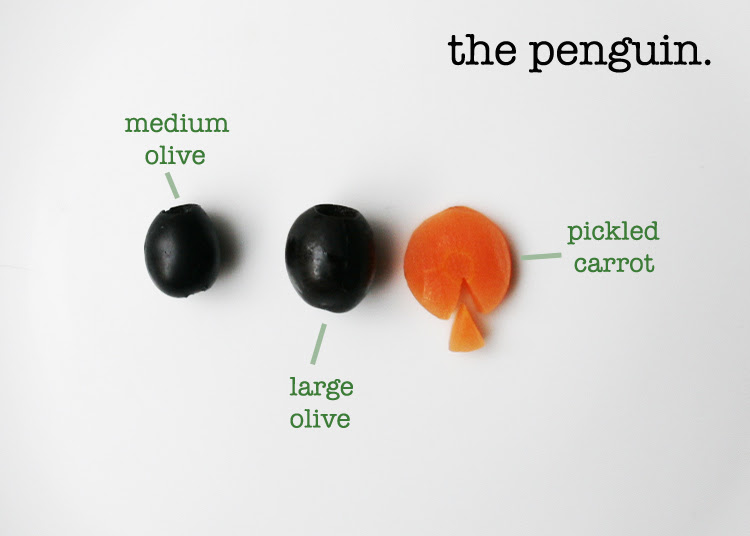 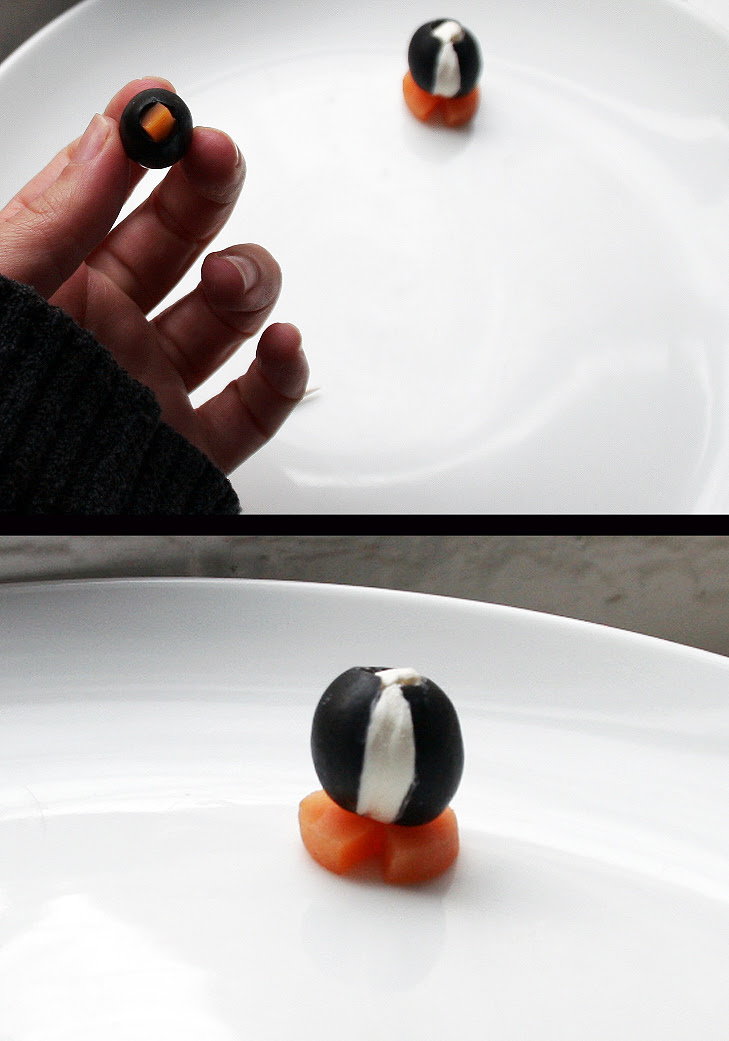 Simply slice one side of the large olive lengthwise and fill with cream cheese (you'll probably want to clean up the cheese smears with a damn paper towel).  Cut a little triangle pie shape out of a carrot coin and insert into hole of medium olive for the beak.  Then layer as shown and skewer that little puppy with a toothpick.  The horror!

<-- Still classy, even without a head) 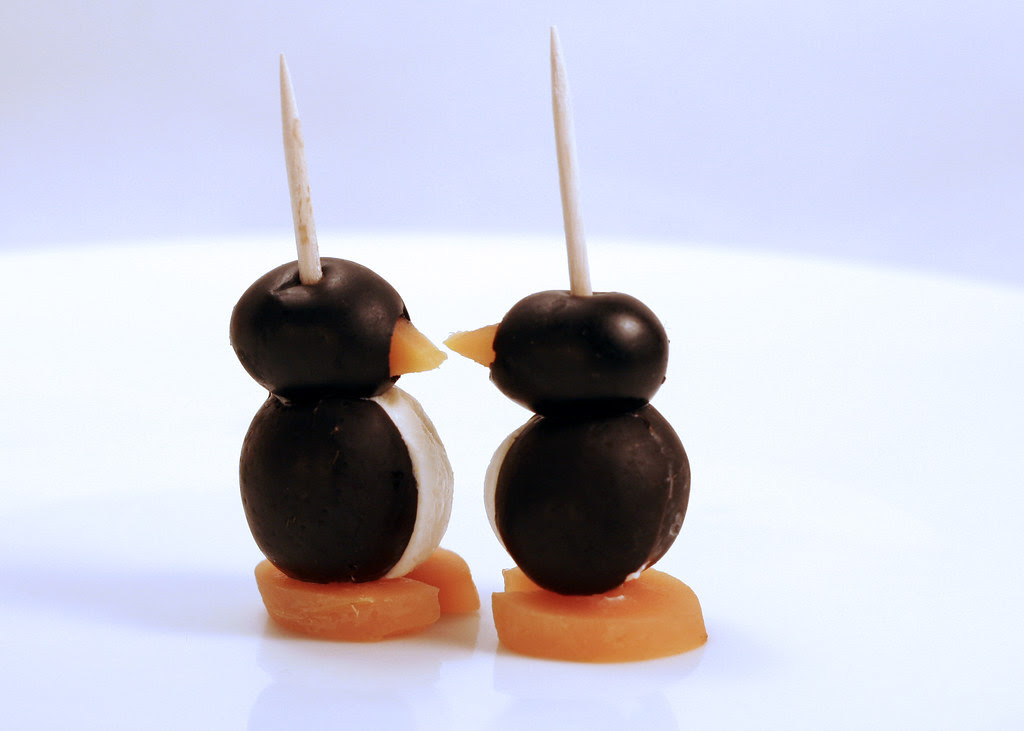 Penguin face-off!
Now, for the snowmen, this is an idea I had myself, but it does seem like a couple other people like me (raised only children, too much time left alone with food) have had similar ideas to mine on this, though I've yet to see an exact replica when I Google'd my creation.  What can I say?  Great minds... or something to that effect.
For the snowmen you'll need...
Small fresh mozzarella "pearls" (available in tubs in many places)
OR
Substitute cream or goat cheese rolled into balls (again, feel free to flavor at will)
Sliced seedless (English) cucumbers - not too thin as these will serve as a base for your snowmen
Whole roasted red peppers - sliced into long, thin strips
A can of medium California black olives
A can of large California black olives
Just cut as pictured below (for the top hat, you're just cutting off the very ends of the olives to make a cylinder shape) and assemble.  Don't forget the toothpicks! 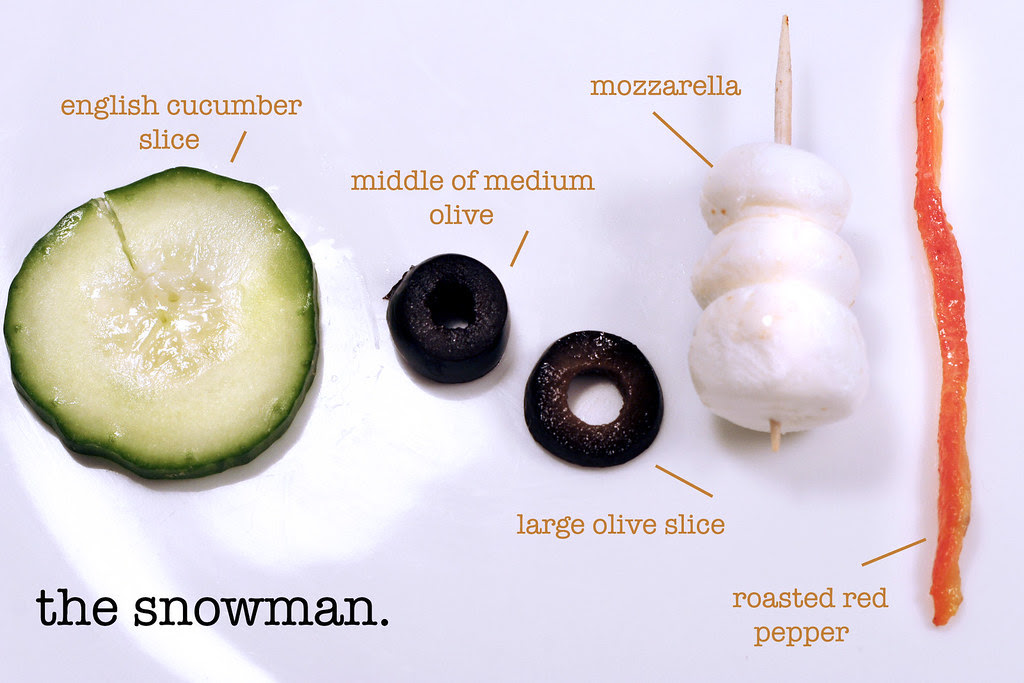 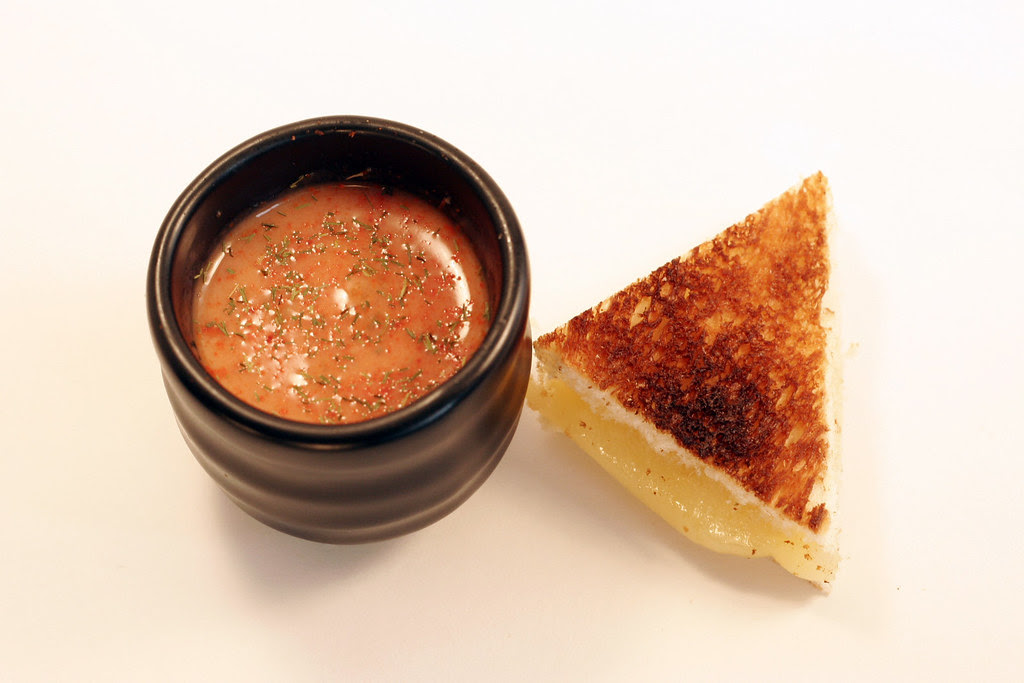 Followed by: Quails eggs and olive oil blinis (aka Mini Pancakes and Eggs) 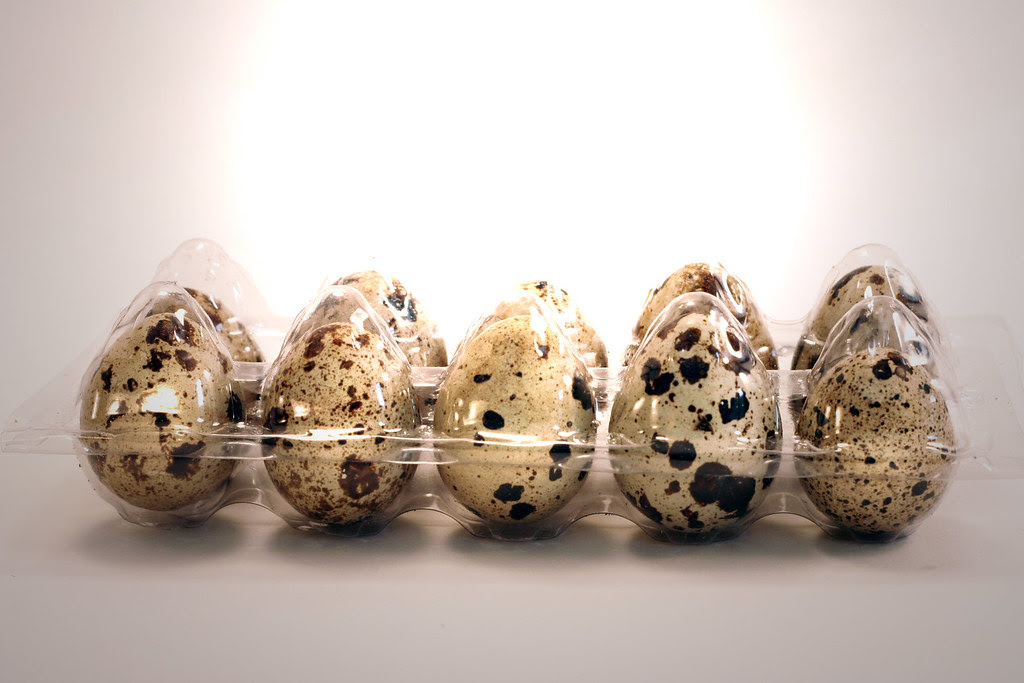 To be concluded with: Thai sweet potato cups 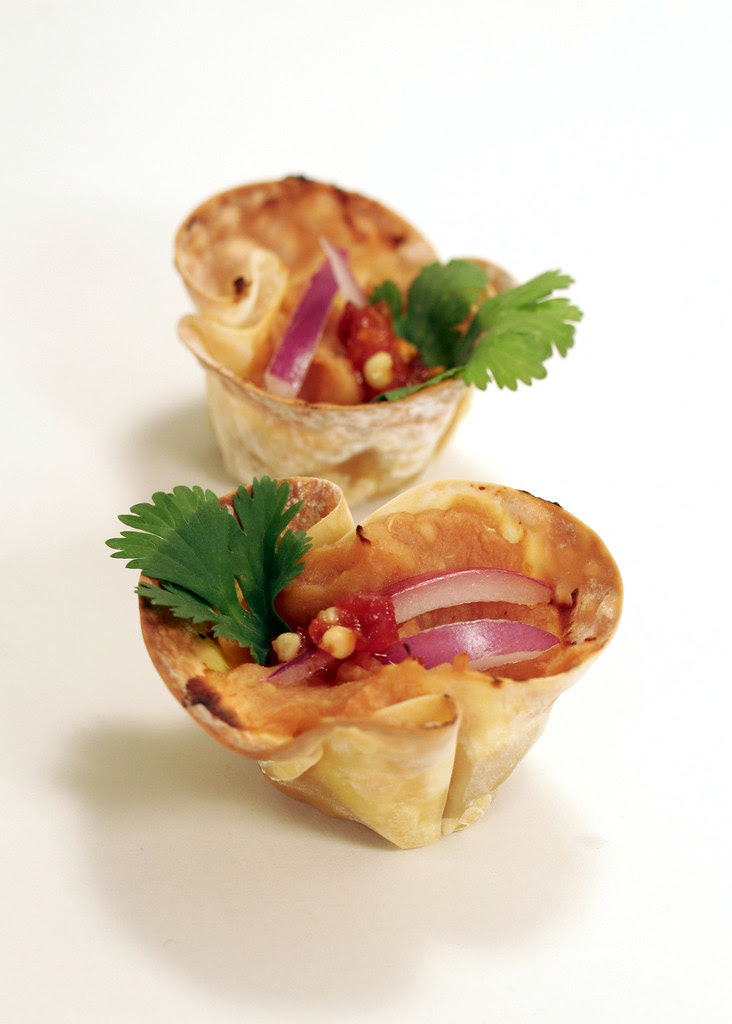 If you've enjoyed my recipes, please vote for my Vietnamese-style Moo Shu at Foodista!  :)