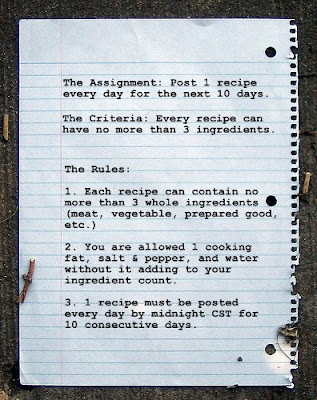 
It has a lot to do with 2 meals and 2 burnt hands. Not making sense?  I'll explain.

Not too long ago Jason gave me the gift of Brussels sprouts.  A friend and I stopped by his apartment and we planned to grab a quick bite when he paused at the door with "I've got something for you... it's nothing big, but the moment I saw it I thought of you."  Over to his undersized fridge where he pulls out a tall stalk of Brussels sprouts like it was Mary Poppins' magic carpetbag.  The stalk was large enough to feed, well... Brussels.  He guesses I'm happy with my gift.  I am, afterall, jumping in place while clapping my hands in glee.

It was decided that lunch would be indoors and self-made as there was no time was wasted de-sprouting and prepping the buds of my very own jolly green giant.  This turned out to be no easy task, as there had to be a good 75 - 80 sprouts on this beast (they can have up to 100 per plant).  But with a trio of workers we had those puppies stripped and quartered as efficiently as leaf cutter ants and it was time to cook.

I'd found Jason's largest pan - an ancient behemoth lurking under woks and cast iron.  In went some cut strips of bacon to sizzle and then we piled in the sprouts.   Even with its capacious girth, the pan could barely contain this mountain of cabbage-y goodness.  They were left to caramelize and fuse with the bacon fat, creating a dense, bright complexity that absolves the vegetable of a thousand childhood whines its ancestors endured when they were served at the table.  Add a couple of handfuls of walnuts, and you have reached vegetal bliss.


There was nothing left to do but toss in some cracked white pepper; A slightly prolonged task at Jason's house as he didn't possess a working pepper mill.  His kitchen is full of these charming disparities: a microplane grater but no potato peeler, several varieties of dried gourmet mushrooms... but not a spoon larger than "tea" in any drawer.  It's the kitchen of a lover of finer things, but still the remnants of a busy bachelor who eats on the run. I make a note to start picking up things to contribute to his cabinets to fill the blanks.  I realize now, however, that I have since confiscated (he did offer!) his microplane, thus depleting, instead of adding to his cupboards.  Bad girlfriend!

We sat down to enjoy what I personally feel is the most friendly dish of Brussels sprouts a person can have, and I suddenly thought, just how many ingredients are there in this?  The pepper didn't really count, or the salt I'd added, which just left sprouts, bacon and walnuts.  3 ingredients.  A simple dish where each element leaves the next uncrowded: a community-share of harmonic flavor.  And an idea for a self challenge was hatched...

Ah, and yes, somewhere along the in the cooking process a glob of hot bacon fat managed to explode onto my hand just as it was closest to the flame while I added the sprouts; a wound which I was destined to repeat just days later as I prepared yet another 3 ingredient recipe... but that story is for tomorrow.

The first recipe will be posted on the 12th (tomorrow), and don't think you've heard the last of the Brussels sprout...