So I have a bad habit of buying weird fruit at the asian markets near my house. One week I'm enamored with the spiky rambutan bins, another it's a bag of mangosteen that end up costing me $22. This week: dragon fruit. I was obviously attracted this time because of the inherent "shiny" gene we all have as children. I wanted this fruit not because of any nutritional value or deliciousness... I bought it because it was pretty and I was mesmerized by the bright pink skin. It was the color of so many dresses and Barbie convertibles I wanted as a little girl... but in food form, and with no mom around to tell me I couldn't have it. 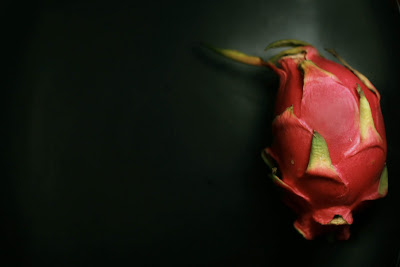 So I found myself walking home with a bag of these things with absolutely no clue if they had high levels of antioxidants or, say, poisonous inedible seeds or ... tasted like feet. All I knew was that I wanted to show them to everyone on the street and take pictures of them the moment I got them home. And so I did take a few pictures before deciding I needed to listen to a second urge common to kids: I had to know what was inside this thing. 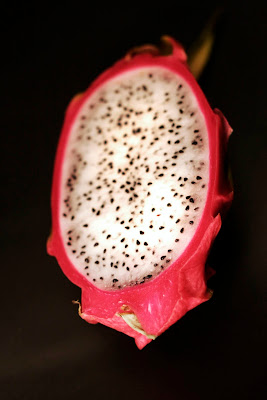 I placed the first fruit on the cutting board and examined it.  I palpated the fleshy exterior and leaned in to take a sniff: there was just a vague sort of green papaya smell. Nothing at all in the aroma department to match it's gaudy skin. I positioned the blade and held my breath as I sliced thru in one clean, satisfying movement. The contents laid out before me like a strange other world. Stark white fruit with perfect black sesame-like seeds. It was perfectly smooth, like glass, orbited by a thin layer of the fuscia exterior. It was beautiful... but what in the frick was I supposed to do with it now...?

I did a quick search online and found that the only real recipes around seemed to be for sorbets. I'd been leaning in that direction anyway, so I decided to go for it, but in typical ME fashion I refused to follow the ingredient lists I found and opted for my own experiment. But what to flavor it with when I had no idea how it tasted? There was oddly no more smell to the fruit now that it was cut open than it had whole. I plunged my spoon into the perfect flesh and extracted a sliver to taste. It has the texture of a kiwi but a subtle flavor that, honestly, reminded me of Tutti Frutti gum. I decided the more rustic granita (rather than sorbet) would be best, and I would make a honey syrup with lime to compliment the subtle flavor.

You can read more about this amazing fruit, also known as the Pitaya, here . Without further ado, the recipe! 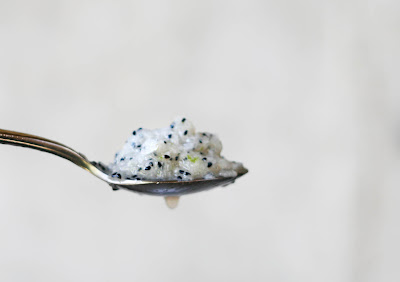 Make a simple syrup by combining the honey and water and microwaving for minute or adding boiling water to the honey and stirring.  Scoop the pulp of the dragon fruit into a food processor or blender.  Add the syrup along with the lime juice and zest.  Blend until smooth.  Pour into a shallow pan and place into freezer.  After 30 mins, scrape the mixture with a fork to break it up.  Do this every 30 mins for 3 hrs.

If you have an ice cream machine, you can instead add this mixture to it and allow to cycle to make a sorbet.