There are several Vietnamese/Chinese/Korean markets just a couple of blocks from my house.  They're surrounded by Peking duck specialty restaurants and the best Pho available in Chicago.  Between Little Vietnam and the gastronomiphile (made up word) establishments of my Andersonville neighborhood, I feel blessed to live in what I believe, in my humble opinion, to be the new epicenter of Chicago good eats.

Tonight was a night spend with some of my dearest friends.  I felt guilty dragging them into my little blog challenge, but thankfully I have the best friends I could ever ask for and not only were they game, they let me drag them to one of the local Vietnamese markets and together we hatched a plot for tonight's 3 Ingredient Challenge.

After debating over bitter melons, silkie chickens (with black skins!) and something cryptically labeled "phallicialia" that we could only guess might be bull's penis, we settled on some fresh head-on prawns in a bin and oyster mushrooms.  This is where I admit a fault of mine:  I am weirdly freaked out by crustaceans.  I like to eat them.  I like to cook them.  I DO NOT LIKE TO SEE THEM IN THEIR ORIGINAL SHELLS.  It nauseates me.  Something in the little antennae and beady bug eyes I no likey.

Every time this comes up, I tell myself to suck it up.  If I'm going to be a cook, I gotta learn to love me some crawdads and lobster and ACK... shrimp with crawly legs and big black eyes.  Some whimpering, pleading and a quick heebie jeebie dance later and we had a nice bag of the prawns collected and away we go... me a little blanche-pale but determined not to be a baby.

The third ingredient was tricky because we needed something that would go well with both mushrooms and shrimp, two ingredients rarely seen together, but would also be able to pack a flavorful punch.  Surveying my cupboards, one of my brilliant cooking buddies suggested turmeric, which then led to the natural progression of curry.  Yes, Curry Shrimp and Mushrooms! 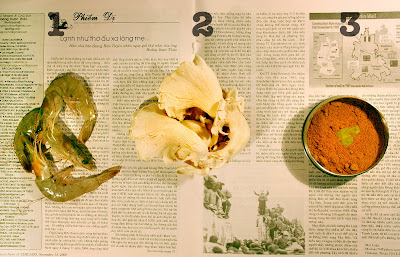 With the help of some good wine, we decided that to get the most of our 3 lowly ingredients, we would broil the shrimp and dry toast the mushrooms in a skillet.  The results were a success: hearty mushrooms, succulent shrimp and a curry sauce to bind it all nicely.  Happy tummies, good friends... is there anything better?  I conclude not. 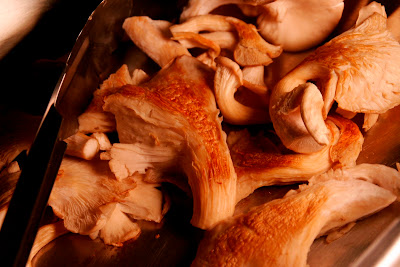 For a refresher on the rules of my 10 day, 3 ingredient challenge, check out the first post. 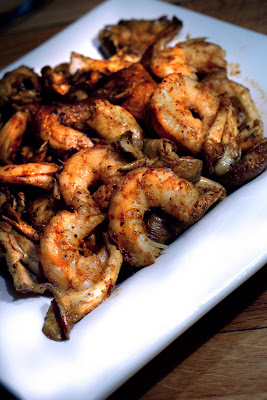